“The ’Brian Murray Community Spirit’ Award is to formally recognise the “behind the scenes” individuals who are always there, ever reliable, who are first to volunteer, who are always there to help a friend and mentor the newest member of the team, who are generous with their time, who are first to attend and last to leave, Brian Murray and Mike were good at this. who have pearls of wisdom to share but expect nothing in return, who are willing to put self-interest behind them and think of others (including Lonsdale) first. Hence it was my honour and pleasure to nominate Mike Browne.

For many years, he has been an integral member of the Lonsdale community – both “behind the scenes” so to speak as well as out front. I make this very public that my role as CEO and being fully responsible for the leadership, stewardship and direction of Lonsdale is made far easier when I have the support and counsel of guys like Mike. His level headedness, knowledge of the industry, business acumen, professionalism and his encouragement and tutoring of others in an unselfish manner are qualities to be admired. He couples this with his wit and humour and these are always appreciated (well, mostly anyway) by his peers and certainly myself and my own leadership team. Mike is truly a worthy recipient of this Award and to be acknowledged by Lonsdale management and by his peers.” 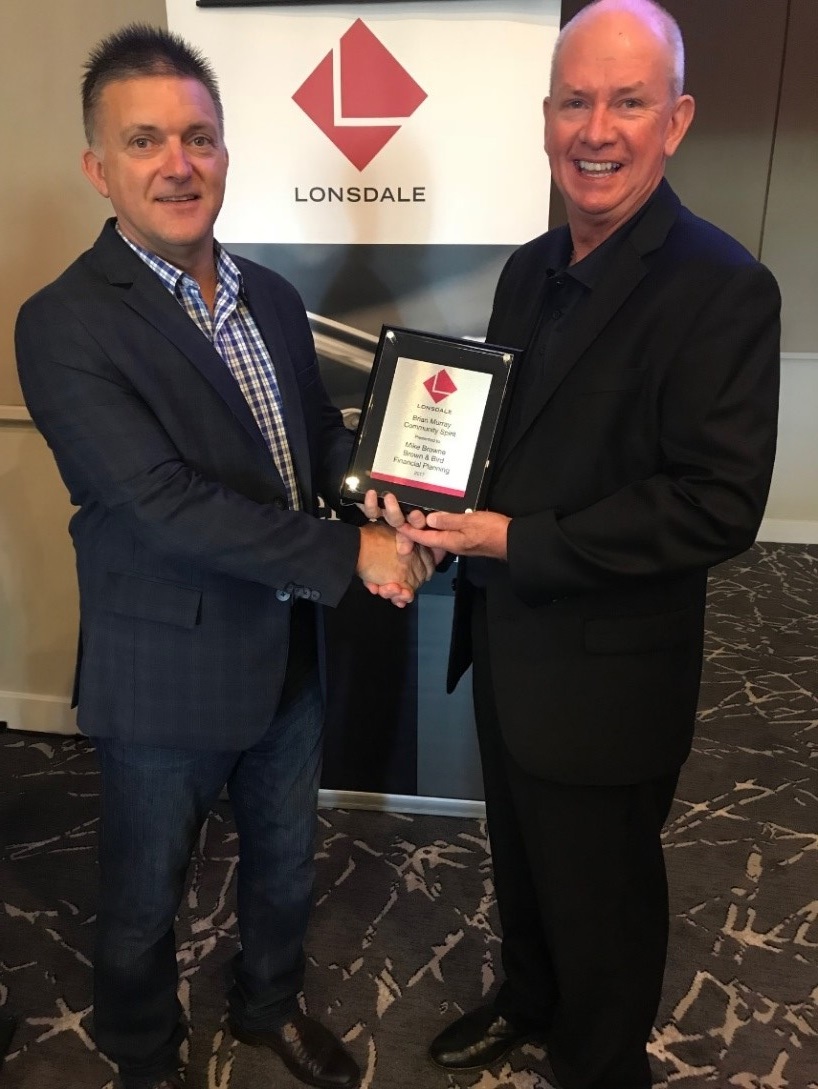 There was surprise at a nomination followed shortly by the thrill of winning for Mackay firm Brown and Bird Financial Planning recently.

The business, which has been operating for about 21 years, was presented with the Lonsdale Associate of the Year award at the Lonsdale and IOOF Alliances annual conference, beating four other finalists on a national basis for the prestigious title.

One of the firm’s two principal advisers, Mike Browne, said his team had no idea beforehand. “We had no indication at all,” he said. “We were just there on the night, and our name flashed up as one of the nominees. That was followed by the announcement that we won it. We couldn’t be more thrilled with this award.”

“We were competing against some very impressive practices who have achieved incredible results. We’ve been working with Lonsdale for over 20 years and we understand the high standards we need to strive towards. It’s great to be recognised and it’s a testament to the fantastic team we have here.”

Lonsdale chief executive officer Mark Stephen confirmed there was some fierce competition from the entire network. “With more than 120 practices in our dealer group Australia-wide, sitting on the panel reviewing this category was quite a task as there were so many practices who were deserving of this award,” Mr Stephen said. “Brown & Bird are a valued member of the Lonsdale network and consistently deliver an exceptional level of service and advice to their clients.”

The award was presented in Perth last month at the Lonsdale and IOOF Alliances national conference.

Contact us today to arrange an initial meeting to discuss how we might be able to assist you.